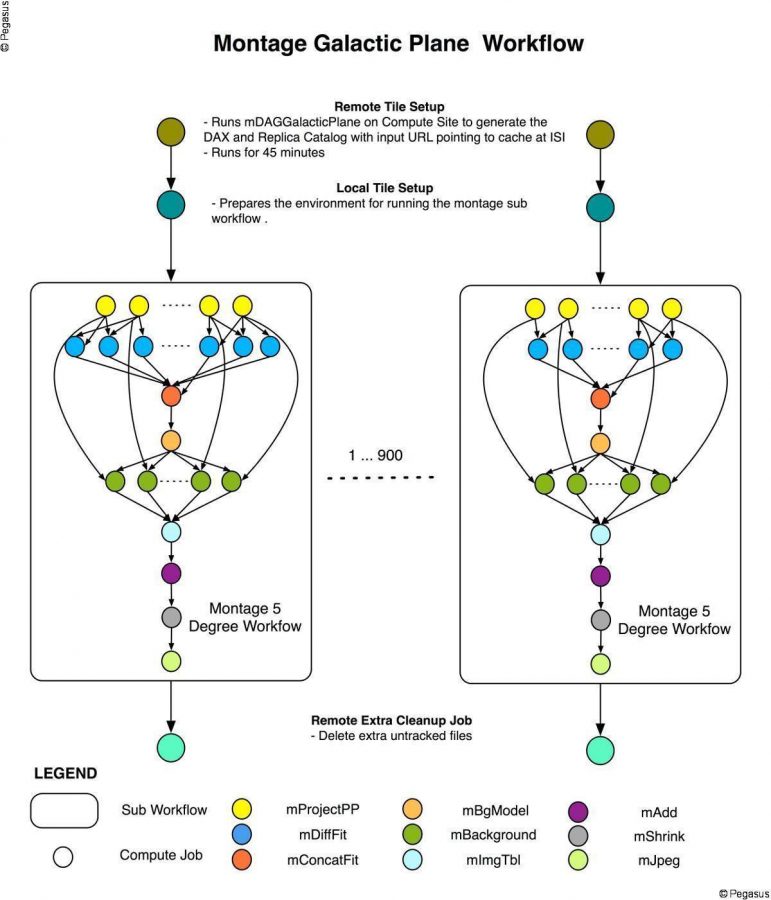 A collaboration with NASA/IPAC Infrared Science Archive (http://irsa.ipac.caltech.edu). The imaging capabilities of the Spitzer Space Telescope have enabled for the first time surveys of the plane of our Galaxy across the infrared spectrum. When taken together with images from existing all sky surveys, these new image surveys contain over 18 million images and reveal in unprecedented detail the structure of the Galactic plane in the infrared between wavelengths of 1 µm to 70 µm. The images provide for the first time a global view of the absorption of light in the near-infrared by the interstellar medium and dense molecular clouds and its subsequent re-emission at longer wavelengths. Investigations of the details of this act of absorption and re-emission over the infrared spectrum and on a global scale is the key to making progress in important questions such as: measuring the total star formation rate of the Galaxy; assessing the supernova rate of the Galaxy; and determining whether coagulation or fragmentation governs the formation of massive stars.

The scientific potential of these surveys is hampered by their different image parameters: the pixels in each survey have differing shapes and sizes on the sky, and are not co-registered (centered on the same position on the sky); the images often contain sky or instrument background radiation and represented in different coordinate systems and projections (a 2-dimensional representation of 3-dimensional pixel pattern on the sky). To study data across these surveys, astronomers must perform the computationally
and I/O-intensive tasks of rectifying the images to a common set of parameters, often on local machines that are not suited for such large-scale processing.

The Galactic Plane workflow will use the Montage image mosaic engine to transform all the images in 17 surveys to a common pixel scale of 1 second or arc, where all the pixels are co-registered on the sky and represented in Galactic coordinates and the Cartesian projection. The Montage engine is a workflow application that is highly parallelizable, and performs all the tasks needed to assemble a set of input images into a mosaic: processing the input images to the required spatial scale, coordinate system, image projection; rectifying the background emission across the images to a common level, and co- adding the processed, rectified images to make the final output mosaic. The result will be a multiwavelength image atlas of the galactic plane that appears to have been measured with a single instrument observing 17 wavelengths. This atlas will be served as a science product to the astronomical community.

The input data set is about 18 million images and they will be used to produce images of the Galactic Plane that covers 360 degrees along the plane and +/-20 degrees on either side of it. A hierarchal workflow will be run for each band, producing an output dataset of 900 tiles, each 5 by 5 degrees in size, and overlap 1 degree with neighboring tiles. Each image will be sampled at a spatial scale of 1 arcsecond, which will preserve the science content of the inout data sets, and will be represented in the Cartesian projection and Galactic Coordinate system, the standards used in representations of images of the Galactic Plane. The tiles are sized to easily be loaded into sky browser software and the tile overlaps provides a smooth scrolling as the user zooms and pans around. The top level workflow will manage the data find tasks against the IPAC archives, and then create 900 sub workflows to process the input dataset. The sub workflows are based on the widely used Montage tool chain developed at IPAC. The Montage workflow is given a region of the sky for which a mosaic is desired, the size of the mosaic in terms of square degrees, and other parameters such as the band and image archive to be used. The input images are first reprojected to the coordinate space of the output mosaic, the reprojected images are then background rectified and finally coadded to create the final output mosaic.